A few months ago, I received messages on my tumblr account asking me about some tips about urbexing. I then wrote some tutorials about it . I’ll be these tips on this website too. So today, this first post in the urbex tips serie will be about gear: what  kind of gear is useful while urbexing. I won’t cover the photographic gear here, only the things you should bring with you while exploring.

To begin, here’s the list of the things that I always have with while urbexing:

Abandoned places are very hazardous places, so I wear sturdy clothes that I can damage. I wear solid trekking shoes because the feets are usually the first victims of distraction: the groound is often covered with trash and one day as I was walking in high grass I stepped on a plank in which there was a big rusty nail that pierced my shoe. Fortunately I haven’t been hurt , but since that day, I always wear solid shoes. I’ve already seen people exploring wearing short and t-shirt because it was summer. This is absolutely ridiculous, I know sweating isn’t particularly nice, but it’s your safety first…

I also always wear gloves to protect my hands. It took me a while to find the right gloves, but I finally found them. I wanted them to be sturdy like working gloves, but I wanted them to be stretch also. I found the perfect gloves in a sport shop, these are sailing gloves: They’re sturdy and stretch, and the perfect thing about them is that the index and thumb fingers are open while other fingers are closed, which makes them extremely useful for manipulating my camera. Here’s a picture of the gloves that I use: 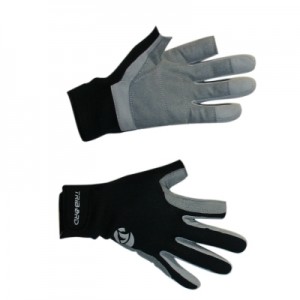 It’s just a small basic first aid kit that I also bought in a sport shop. It contains disinfecter, sterile gauze and plasters. It is really important to be able to clean and dress a wound while urbexing, you really don’t want an injury to get infected or to prevent you from exploring more.

I bring two flashlights with me: a small but powerful led maglite that works using batteries, and a small flashlight that works without battery but that can be charged using a dynamo. My main flashlight is the maglite. It is powerful and allow me to see well in the dark and it also helps me sometimes while taking picture to light a particular thing or when the autofocus has some difficulties to focus. I bring spare batteries for it just in case. The second flashlight is more like an emergency flashlight. It is not very powerful but can provide me enough lightso that I can see where I’m going. It is very useful because it works with a dynamo, which means that I’ll never have battery problems with it and that, theoretically, it will never let me down.

I like to bring some food while urbexing because I usually go the whole day exploring, and at a time I’ll certainly end up hungry. It is important to be as comfortable as possible while exploring because you have to be attentive to a lot of things and you probably don’t want to pay much attention to your stomach. So I bring a few cereal bars because it is very energetic. I also bring water bottle with me.

This is a small bottle containing a hand cleaner product without soap. It is alcohol based so you don’t have to dry your hands, and has a bactericidal effect, which is really useful, because you’ll surely be touching things very dirty.

One of the most important thing to bring with you. In case of problems, you can call for help. But don’t rely too much on it, because there are places where it won’t work, for example in underground places, so never forget to tell someone where you’re going before leaving. I always tell my wife exactly where I go and at what time I’ll be back. She knows that if I’m not home by that time, something went wrong and she knows where to search to find me. Two important things to remember about cellphones: first, always check that your battery is full. This may sound silly but it is a little detail easily forgotten. Second, always put your cellphone on silent mode. You really don’t want your phone to ring loudly when you’re in a place where you’re not supposed to be. It happens to me one time as I was exploring a crypt under a cemetery. My phone began to ring, and I cursed myself for that mistake. Since that day, I never forgete to put my phone on silent mode.

I think that’s all for these tips about the gear you should bring with you while exploring. I hope it’s been a useful post for you, and if you ever have anything to add, leave a comment !